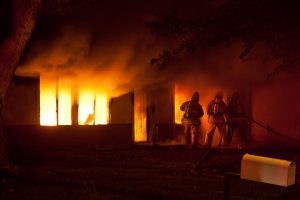 END_OF_DOCUMENT_TOKEN_TO_BE_REPLACED

On average, Alabama typically experiences over 100 deaths per year associated with fires. Nationally, the average number of deaths per year from fires is around 4,000.  This means that someone is dying from a fire every 3 hours, approximately.  Approximately 75% of all annual deaths from fires involve a residential property.  The US Department of Commerce, Bureau of Economic Analysis estimates that the total annual cost to society associated with fire losses is a staggering $182 billion.  Residential and non-residential STRUCTURE fires comprise 35% of all annual fires.  Alcohol use contributes to an estimated 40% of residential fire deaths.  Nearly one out of every seven fires to which a fire department responds involves a vehicle.

The fire problem is more severe for some groups than others.  People in the southeast, males, the elderly, African Americans, and American Indians are all at higher risk from fire than the rest of the population.

Fire safety experts recommend that if you are confronted with or facing a residential fire that cannot be easily extinguished to call 911 first before trying to extinguish the fire as many have made the mistake of waiting until the last minute to call 911 which ultimately resulted in damages/injuries that could have been avoided if the fire department had been notified sooner and been able to arrive more promptly.